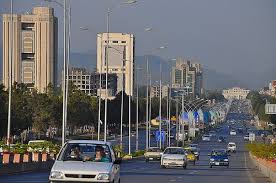 New Blue Area Islamabad: PM Imran Khan announced the launch of the New Blue Area in Islamabad on Sunday 1st March 2020. He further stated in the inauguration ceremony that this area will provide job opportunities for a large population that is working in the construction sector. The government has announced this project in the hope for speeding up the economic process in the country.

The reason for the announcement:

The main reason for the announcement of this project is that the old blue area of Islamabad has been the business hub for the city for a long period of time. Due to the migration of a large population to the capital for better-earning opportunities, this area has become increasingly populated and congested. Therefore the Capital Development Authority (CDA) has acquired nearly 170 canals for this project.

Location of the New Blue Area:

New blue area project Islamabad map: The location of this project is on the direct opposite side of the F-9 Park in Islamabad. The area has not been demarcated properly yet but speculations regarding this project are that it will be built on this area.

This area is providing a huge business opportunity for a large number of real estate developers and investors. The land will be auctioned at a later date in April 2020, which is yet to be announced by the government. The government hopes to generate around 30 billion rupees from the auction of this project

The government has announced that this area is not only going to be used for building commercial areas. A large chunk of land will be used by the government for the construction of apartments which will then be given to the population that is currently living in the various “Kachi Abadis” throughout the city to give them proper housing a roof over their head. The money that will be acquired through the auction of this land will be used for the development and construction of these residential apartments for the people of Kachi Abadis.

Upon the auction of this plot has been done, it will provide a huge opportunity for not only he real estate developers and investors, but also for those who are hoping to start new businesses. The central location of this land is an added advantage for the people of Islamabad and from other cities as well who want to start a business in the capital of Pakistan. It will help in providing a boost to the economy of the country as well.