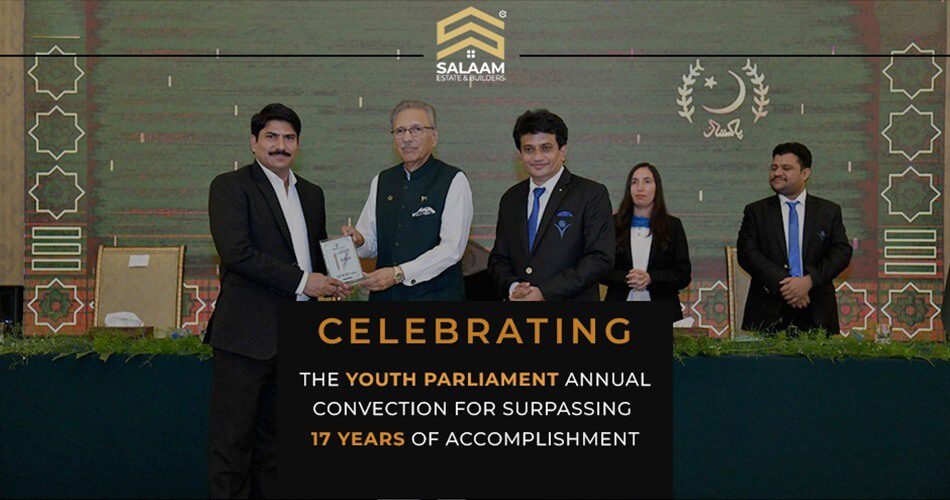 Mr.Saifullah, DreamsNex Group’s CEO, was awarded yet another award and too at the President House this time on 19 September 2022. It was in the event of Youth Parliament Annual Convention. This makes the real estate industry extremely proud. This award was given to him for his efforts in inspiring the next generation of real-estate professionals.

President of Pakistan, Dr.ArifAlvi has created the Youth Parliament as one of his initiatives to rekindle enthusiasm among the country’s youth. The Youth Parliament members have an excellent standard to follow after the success of the Annual Convention, September 19, 2022. President ArifAlvi urged the heads of the country’s youth parliament to adjust to the rapid, technologically-driven changes now happening in the country. The nation made great progress after he encouraged others to follow his lead.

President DR Arif Alvi has been empowering the Youth Parliament to induce the sparks of the young generation. Hence, after the successful Youth Parliament Annual Convention held on the 19th of September 2022, it is a huge benchmark for all the Youth Parliament Members to win the situation. President Arid Alvi informed the youth parliament leaders to adapt to the quick, modernized changes that are taking place in this highly-technological world. He inspired everyone to bring in innovations as well so that immense progress can be seen within the country.

The message has been far spread across the whole nation which also introduced numerous other companies that can also take part and have such as Salaam Estate and Builders who are known to be the fastest growing builders in Bahria Town Karachi. The president gave a motivational and inspiring speech talking about how Quaid-E Azam worked hard for the nation so that the youth can survive and build more for the nation. Hence, this goes along with attaining a high level of education, discipline as well as other extra tasks for the better of human life and work ahead. 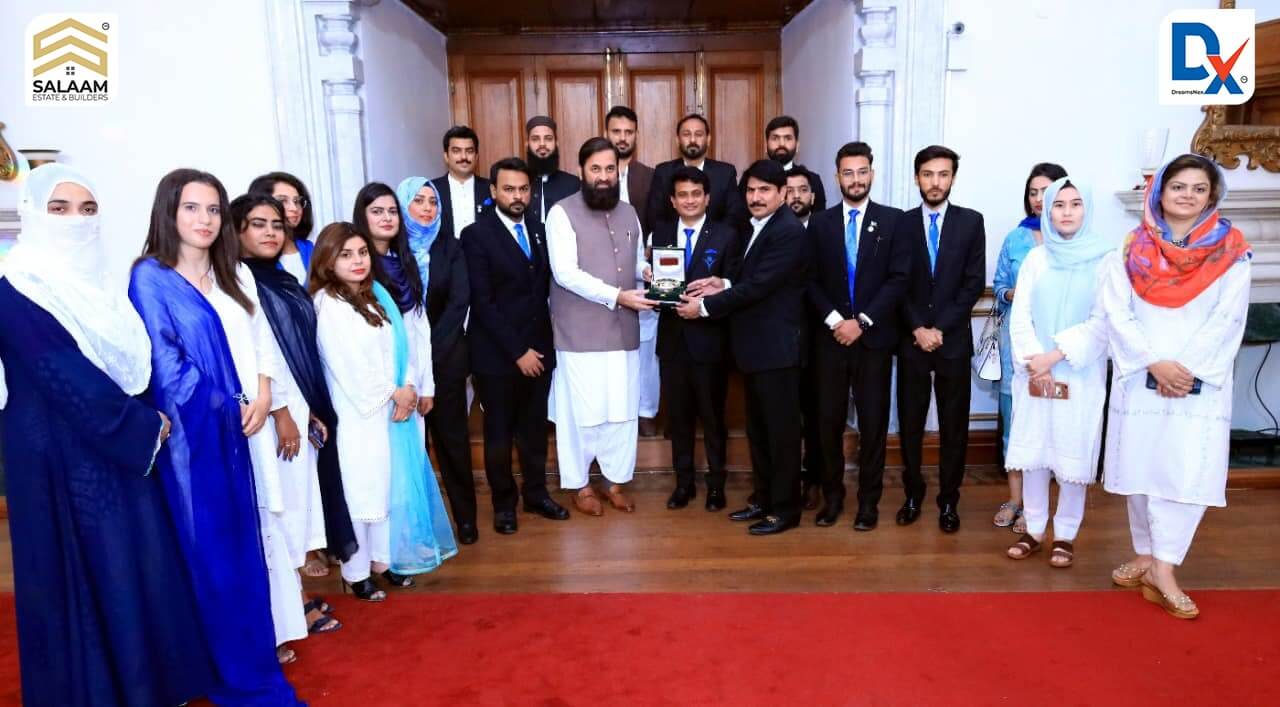 There is no secret that the youth need the time to have a supportive bloom while gaining all sorts of different educational forms and learning tasks. Hence, leadership and management roles are being taught from a young age so that there is an ease in the upcoming or near future. Moreover, it is not just to bring up the youth of the country to become role models but, President Arif Alvi also gave importance to the values of the country which are always supported by the functioning of the country. Therefore, he laid much emphasis on how hard work and determination are important to fulfill the numerous tasks that lay in front of you. The best example was given by helping the flood victims which were large in number about 33 million.

This goes out to all the leaders who showed off their determination as well as skills to save the flood victims and provide them with food and shelter. This was further carried on by saying that other institutes need to incorporate these elements in their facilities as well such as Red Crescent. Hence, the message has been spread to numerous different companies and business owners who now take immense pride in standing with the Youth Parliament such as Salaam Estate and Builders.

Nothing is achievable unless the right characteristics are developed within the individual such as helping behavior. Therefore, President Arif Alvi also gave importance to helping other people through different means such as blood donations to save lives. Moreover, he also gave emphasis on how women can be the best helping hand in our society in economic factors. Furthermore, he asked all of the Youth Parliament members to have strong and authentic knowledge about CPR as well as First Aid techniques and these elements can be used anywhere at any time.

Lastly, to conclude the event, immense appreciation and dignity were granted to all of the members of the Youth Parliament for taking part and helping in different factors in Pakistan and making the issues more aware so that numerous more join in. Hence, to bestow them the greatest gift, they were awarded mementos to the youth leaders for the completion of 17 years and having great victory by far. 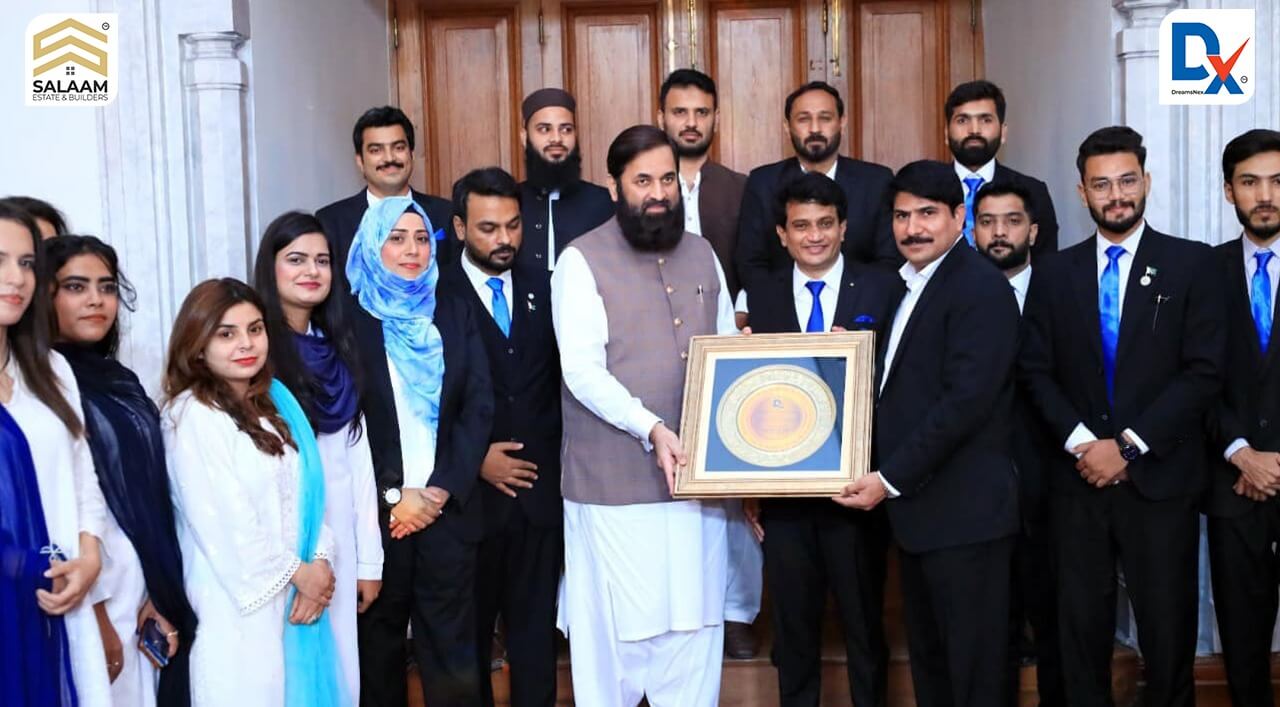 Word has spread throughout the country, and many other companies have joined the program, including Salaam Estate and Builders who are the fastest-growing builders in Bahria Town Karachi.Quaid-e-Azam Muhammad Ali Jinnah, Pakistan’s president, praised Pakistani youth in one of his speeches. He said, “Pakistan is proud to its youth, particularly the students who are nation builders for the future.” This sentiment was attributed to Quaid-e-Azam Muhammad Ali Jinnah by the president. They need to be prepared for the hard work ahead by acquiring knowledge and discipline. Quaid stated that young Pakistanis must be able to acquire cutting-edge knowledge in all areas and adopt intellectual, scholarly and technological changes to help their country grow and prosper. He stated that Pakistan’s youth were the best in their position to guide the country’s efforts to improve its economy, commercial infrastructure, as well as to adhere to democratic ideals.

The President stated that the Constitution should unify us. According to him, all political parties strive for unity and are committed to the country’s prosperity and progress. He stated that the country’s problems, such as rehabilitating 33million flood victims, can only be solved through broad discussion, democratic decision making, and passionate determination. He stressed the importance of empowering children through Boys & Girls Clubs and the Red Cross to support the country in times of crisis. He stated that young leaders must always donate blood to save lives in hospitals.